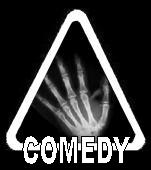 The Skeleton Project perform stand up & short comedy sketches. Contact us to book us or for more info.

We have performed standup at Pubs from February 08. Other gigs include comedy sketches at Trash in Leeds.
Through this we have created 'The Drunken Monkey Comedy Nights' which involves standup, live sketches and short comedy videos on a big screen, we are looking for other venus that could host this type of event.
We are working on comedy sketches, standup and short films.

We have recorded some stupid songs that are about TV shows. We will perform them at festivals and comedy nights. See videos below.

Error is a web series made up of all the stuff that cant be used for other stuff, but is too good to throw away. Its the behind the scenes, the bits that go wrong & the just plain odd. In the long run aim to include animation, music and all things wierd and wonderful on these and will be online soon to watch.
Episode 1: Comedy? Has dissapeared to the land of not funny things.
Episode 2: Making of b(ITCH)