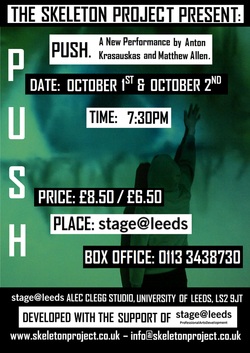 Somebody once said something. It stuck with me for so long that it
became a motto.  A mantra by which I could live my life and feel certain that I was
doing the right thing. I passed it on, and we kept it safe and we made it our
manifesto. Now...now we're not so sure. Somebody isn't around to
give advice anymore and, whatever happens, it is imperative that we don't make  the same mistakes we have made in the past.

The awful conversations, the  hilarious injuries, those first meetings and those moving-on. All of these  things have happened, and all of these people are here tonight for the same  reason.
Just breathe. We're nearly there.
Just one more PUSH and it will all be done.


PUSH is a new performance about loss, love, life, battle of the bands, protest camps, student flats and everything that has happened between.
See the show first at Stage @ Leeds on October 1st & 2nd 2012 at  7:30pm

Developed with the support of Stage @ Leeds
The Skeleton Project